The student becomes the master. After being traded to the San Francisco 49ers at the trade deadline, Garoppolo has become an interesting player to look out for in next year’s MVP race. If the 49ers become good again, it will be because of Jimmy G’s ability to bring them relevance.

Offensive Rookie of the Year

Few believed that Tennessee’s Alvin Kamara could become the OROY, but stranger things have happened in the NFL. It may be a safe pick to choose Barkley for next year, but there isn’t anyone who comes close to his pro-readiness.

Defensive Rookie of the Year

There are many players I could choose from, but I ended up going with James out of FSU. Why? He’s a thumper who has ball-hawk instincts. I think any team becomes better with him on the roster.

Offensive Player of the Year

After suffering a season-ending injury last season, OBJ will look to recoup and put on a clinic for either Eli Manning or whoever is at QB. People won’t forget how dominant a receiver he is for long.

Defensive Player of the Year

I believe 2018 will be the year that there will be consensus on who the most dominant corner in the game is, and his name is Jalen Ramsey. Ramsey has ability to cement himself as the best in the business with a stellar 2o18 campaign; it’s up to him if he delivers.

Head Coach of the Year

I tried to think outside-the-box on this one, and I’d like to continue the trend of first year head coaches winning this award. Wilks brings a defensive mind to an intriguing defensive unit. With the help of a QB and the return of David Johnson, Wilks could definitely win it.

Comeback Player of the Year

It’s good to see Keenan Allen back in his Pro Bowl form. For next season, a major headline is the health of Andrew Luck. If Luck is healthy and plays well, he’s almost a shoe-in to win this award. 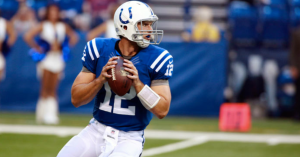