Before I pick who I think will end up in the Super Bowl, let’s go over a crazy weekend of divisional round games.  Let me mention that I went a horrendous 1-3 with my picks last week.

I mentioned in my preview of this game that Atlanta didn’t need many points to win.  They didn’t.  However, their offense could only muster a mere 10 points, and it is playoff disappointment once again for Atlanta.  Atlanta led 10-6 until Jake Elliot kicked a 53-yard field goal after missing an extra point, and the Eagles were down by 1 heading into halftime.  But, the Eagles defense completely shut down the Falcons offense, including a great goal line stand at the end of the game.  Nick Foles is now two wins away from giving Philly their first Super Bowl.  A Jeff Hostetler-like run could definitely be a possibility.

So, this is the one game I picked right.  The catch is that literally anyone could’ve done that.  When the Titans got up 7-0 early on, I buckled my seatbelt for the possibility of a shocking upset.  But Tennessee couldn’t get their run game going, and they didn’t get pressure on Brady.  If you don’t sack Brady the entire game, it’s little wonder he drops 35 points on you.  The most surprising result of this game is the firing of Coach Mike Mularkey.  I understand the reason for this is his intention to keep a coaching staff with a porous offensive coordinator and an ancient (albeit very well-respected) defensive coordinator.  However, the coaching field is quite thin.  The Titans will hope to get a guy like Josh McDaniels, and not an unproven guy like John DeFilippo.

In a game I expected to be low-scoring, there was a total of 87 points.  Leonard Fournette had a great day, and Blake Bortles was efficient.  Bortles only attempted 26 passes, as that was a great game plan for him.  Give Jags offensive coordinator Nathaniel Hackett a lot of credit, as Bortles avoided the interceptions.  And like I always say, when he doesn’t throw a pick, the Jags win.  Still, Bortles deserves a lot of credit for going toe to toe with Big Ben in the second half.  The Killer Bs were on full display on Sunday, as the Steelers put up 42 points and had many incredible touchdowns.  However, offensive coordinator Todd Haley will take a lot of deserved heat for not having Big Ben run a QB sneak on that 4th and 1 call.  Ultimately, the defensive touchdown that Telvin Smith made was the deciding factor of this game.

One of my first thoughts after watching the end to this incredible game was “Will it get a nickname?”  I found an extensive Wikipedia article written about the “Minneapolis Miracle” the very next day.  The internet doesn’t take long.  People will make this game all about that final play, so it’s going to be forgotten that Minnesota had a 17-0 lead at one point.  They were very close to choking it all away, and continuing a string of playoff heartbreak.  Drew Brees stepped it up in the 2nd half, throwing for 3 touchdowns to 0 interceptions against an elite Minnesota defense.  The Saints kicked a field goal to go up 24-23, but then the miracle happened.   All I can say is poor Marcus Williams.  He actually made a pick earlier in the game that gave New Orleans momentum.  But like I said, that’s all going to be forgotten now. 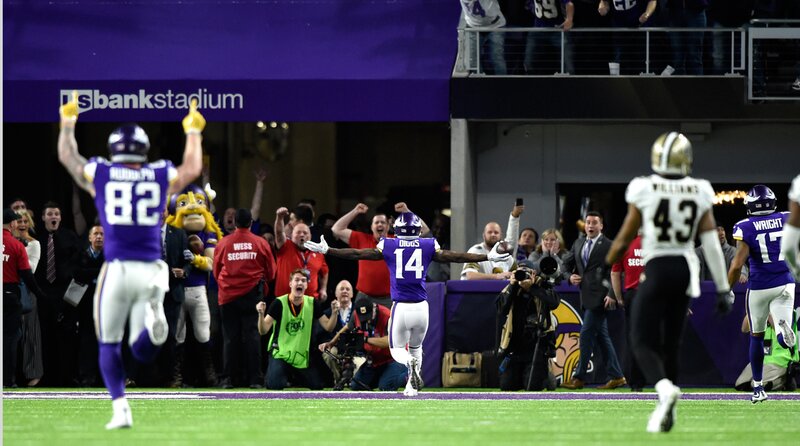 Photo Courtesy: Hannah Foslien/Getty Images.  Diggs had an incredible walk-off touchdown to end the game as time expired, as I’m sure you’ve heard.  The point after attempt was accurately summed up by Joe Buck as “the most anti-climactic moment in NFL History.”

JAC @ NE: How the Jags Make the Super Bowl

Even if the Jags lose to the Pats, saying this season was a success would be an understatement for them.  Jacksonville getting out to a 21-0 lead in the Divisional Round told me this team is tired of being disrespected (and they’re 9 point underdogs in this game).  It certainly seems disrespectful to me.  However, Colin Cowherd made a good point about the Pats not only beating teams they’re heavily favored against, but also covering the spread.  But somehow this Jags team feels different.  The Jaguars have an elite pass rush, which is something you need to beat Brady.  Calais Campbell is a defensive player of the year candidate, and the rest of the d-line is stacked with young talent.

Jalen Ramsey has guaranteed a Super Bowl win for the Jags, and there truly seems to be a chance he’ll be eating his words, considering he’s going up against the GOAT.  However, Ramsey and the secondary have complimented the pass rush extremely well all season.  As for the offense, the thing they do best is run the ball with Leonard Fournette.  As we all know with Bill Belichick, he likes to “take away” what a team does best.  Know what that means?  Blake Bortles will have to make plays.  But what Bortles mostly has to do is avoid interceptions.  If he doesn’t get picked in this game, to me the Jags pull off the upset.  If he gets picked one or more times, the Pats are heading to another Super Bowl.

Image Courtesy: John Raoux/AP.  The Jags had the talent, but they needed the discipline.  Tom Coughlin brought it, taking a team from 3-13 to the Final Four of the NFL.

What the Pats Need to do to Avoid the Upset

Well, the Pats are in their 7th straight AFC Championship.  Just think about that for a moment.  The Pats are looking to add to their legacy of success with their third ring in four years.  This is something they did at the start of the 2000s.  This is why if they do win the Super Bowl, I’ll view their run of dominance as two separate dynasties.  Standing in the Pats way is the kind of team that has given them fits in the playoffs before.  The most crucial thing the Pats must do to win is protect Brady.  If the offensive line can protect Brady, chances are he’ll do quite well.  After all, the Jags did give up 42 points last well.  The Steelers may have had the Killer Bs, but the Pats only need one Killer B to win… well, Gronk helps as well.

Because the Jags defense will be very committed to stopping Gronk, passing to Danny Amendola and Brandin Cooks could definitely get the offense going.  Not to mention, the screen game with James White and Dion Lewis was great against the Titans.  Dink and dunk plays truly help the Pats offense succeed.  On defense, the Pats can’t let the Jags jump out to an early lead.  The Jaguars getting off to a 21-0 lead against Pittsburgh stunned the crowd, and made the home field advantage less of a factor.  New England must avoid this at all costs.  The most important thing for the Pats is to pick off Bortles at least once.  Like I said, if they do that, they will win this game.

I do see the Jags covering the spread, but it ultimately won’t be enough to go to Foxborough and beat New England.  As a Giants fan, I know teams with Tom Coughlin as a leader tend to beat New England.  And trust me, I’m pulling for the Jags just as much as most other non-Patriots fans.  But realistically, Bill Belichick-coached teams are well-oiled machines, and they’re on their way back to the Super Bowl.

MIN @ PHI: How the Eagles Make it to the Super Foles (Pardon the Awful Pun)

While Steve Sarkisian will take a lot of heat for his poor-play calling against Philadelphia, the Eagles defense must truly be commended for their effort against the league’s reigning MVP.  Their #1 ranked rushing defense combined with the emergence of second year QB Carson Wentz is what brought them here.  Unfortunately, they don’t have Wentz anymore.  However, they do still have that amazing run defense, which means Case Keenum will have to step up and make plays.  And despite Keenum’s incredible season where he has proven doubters wrong on a weekly basis, he’s now playing in the not-so-friendly confines of Lincoln Financial Field.

However, another backup QB that must make plays in order for his team to win is Nick Foles.  Fortunately, the Eagles are likely feeling a lot more confident in their signal caller.  While he didn’t have any touchdowns in his game against the Falcons, he also had no interceptions, and his passer rating was over 100.  Granted, this Vikings defense is going to be a lot tougher than the Falcons.  While the Vikings run defense is great, so is the Eagles rushing attack.  Something has to give.  With Philly having home field advantage, Foles can concentrate much better than Keenum.  That could be the difference.

How the Vikings Go Back Home For the Super Bowl

While the crowd may distract Case Keenum, he has a nice set of weapons to work with.  Stefon Diggs, Adam Thielen, and Kyle Rudolph have to exploit the Eagles secondary, as that is not the strong point of this Eagles defense.  Much like the Eagles, the Vikings run game will likely get stuffed.  Philly and Minnesota are the first and second ranked run defenses respectively.  The offensive line for Minnesota can’t let Keenum get under duress, as that could make him throw a ball up in the air for an interception.

As I mentioned with the Vikings in last week’s article, don’t let the ghosts of past failures haunt you.  Kai Forbath, you better not be thinking about Gary Anderson and Blair Walsh.  Forbath nailed a 53 yarder in the game against New Orleans, so that’s a good sign.  However, in a game that will likely be a defensive slugfest, it could ultimately come down to the kicker.  You gotta put it through the uprights.  On defense, the Vikings got what would seem like a favorable matchup in Nick Foles.  While Foles has solid weapons in Alshon Jeffrey and Zach Ertz, he won’t be able to get to them if Minnesota takes advantage of replacement left tackle Halapoulivaati Vatai (with a name like that, there’s a reason they call him Big V).  If the Vikings can come away with some turnovers, they could be “Bringing it Home”.

To prove what a weird season this has been for football, I’m projecting the Vikings to actually win this one on a last second field goal.  Just think about if folks, we could be getting a Super Bowl matchup of Bortles/Foles or Bortles/Keenum.  To conclude, no one’s preseason predictions are coming true.  Well, maybe Malik Jackson’s might (just not the undefeated part): http://jaguarswire.usatoday.com/2017/07/22/malik-jackson-boldly-predicts-the-jaguars-to-go-undefeated-and-win-super-bowl-lii/